“Rode around with committee appointed by the citizens of Binghamton to look for a site for the institution.”
Diary entry: April 14, 1858 – Joseph Edward Turner 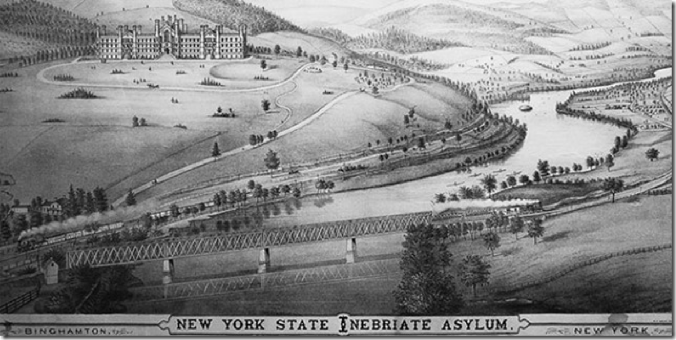 Get the whole story of Binghamton’s Historic “Castle on the Hill” this Thursday.
A Presentation by Roger Luther
Thursday, October 22 at 5:30pm at the Binghamton University Art Museum

Hans Gindlesberger, Untitled (slide), from the series I’m in the Wrong Film. Image courtesy of http://www.gindlesberger.com.

Hans Gindlesberger, Assistant Professor in the Department of Art & Design, presented a paper, “Incursions: New Technologies in the Territory of Photography” at the Festival Internacional de Fotografia in Belo Horizonte, Brazil on October 4th.  Gindlesberger also has three different projects in upcoming exhibitions. Eight prints from his series “I’m in the Wrong Film” are part of the Plain Airs: Contemporary Takes on Reality and Realism show at the Indianapolis Art Center through November 22.  Work from “Weighing the Rain” is part of the Size Matters exhibition at the Medium Festival of Photography in San Diego, October 24 – November 23.  And “Street Scene,” a collaboration with Milwaukee-based photographer Jon Horvath, is included in the Society of Photographic Education Southeast Regional Juried Photographic Exhibition at Clemson University, October 2 – January 28.

Congratulations to Associate Professor Karen Barzman, who has been elected Honorary Academician (Accademico Onorario) by the members of the Accademia delle Arti del Disegno, founded in Florence, Italy in 1563.  The honor is in recognition of her work on the Florentine Academy, including her monograph, The Discipline of Disegno:  The Florentine Academy and the Early Modern State (Cambridge, 2000).  Once inducted, she will share the title with Margaret Haines, Renzo Piano, and Daniel Buren, among others. The formal induction will take place on October 17, 2015.

Publications by current and recent graduate students scheduled to appear in internationally circulating juried journals are bringing new attention and visibility to the graduate program in the History and Theory of Art and Architecture at Binghamton University.

Na’ama Klorman-Eraqi (PhD 2013) has two articles in press: “The Hackney Flashers: Photography as a Socialist Feminist Endeavour,” which will appear in the British journal Photography and Culture; and “Underneath We’re Angry: Feminism and Media Politics in Britain in the Late 1970s and Early 1980s,” scheduled for publication in Feminist Media Studies. An important historical essay by Hye-ri Oh (PhD 2013,) “Translating Photography: The Migration of the Conception of ‘Sajin’ from Portraiture to Photography,” is scheduled for publication in the field journal History of Photography, volume 39, issue 4 (November 2015).  Doctoral candidate Rotem Rozental’s critical essay, “Under Dor Guez’s Bed: Scenes from the ‘Christian Palestinian Archive’,” has been accepted for publication in the British journal Photographies in 2016. And a long interview by Yang Lijun with doctoral candidate Dengyan Zhou, “Photography, History and Art History: An Interview with Zhou Dengyan, A Doctoral Candidate in Art History at Binghamton University” [“Sheying, Lishi, Yishushi: zhuanfang Binghanmudun daxue yishushi xi zaidu boshisheng Zhou Dengyan”], is to be published in Chinese Photographers [Zhongguo sheying jia] in October, 2015.

All these publications will appear in leading scholarly journals in the field over the next few months. They highlight the range, quality and innovativeness of graduate research in the department, adding to the long list of scholarly articles and books produced by graduates of the program over the past twenty-five years. Further details may be found at: http://www.binghamton.edu/art-history/news/grad-awards.html#books.

Please join us for a lecture in memory of Barbara Abou-El-Haj (1943-2015), celebrating thirty years of teaching and mentorship at Binghamton University and her ground-breaking contributions to the field of art history.

On Thursday, October 8, from 4:00-5:00 p.m. in FA 179, the museum will open the exhibition Inverted Balance, curated by students of professor Tomonari Nishikawa from CINE 380J: Curating Film and Video. Throughout the course, students will learn how to curate a screening program with short films, while working on organizing an event, SEFF Binghamton: Student Experimental Film Festival, which will take place during the first weekend of December, showcasing 30+ short films completed by students at other universities nationwide.

All works at this exhibition, except a short film “Chiasmus” by Daichi Saito, a current Artist-in-Residence in the Cinema Department, are from the permanent collection of the Binghamton University Art Museum.